RIP TO OUR CHILDHOOD- TOYS “R” US 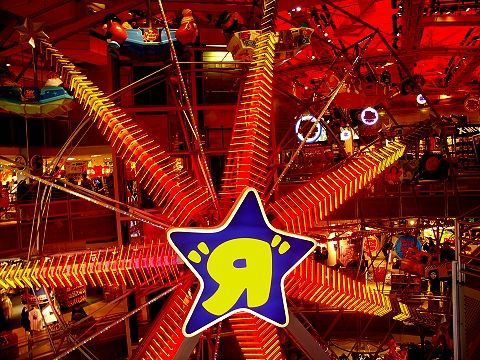 Seeing headlines of “Toys “R” Us closing made my heart drop! All the wonderful memories shopping in the store and the anticipation of my mom taking me there when I was little and me thinking “Hmm, what will she get me today?”. For Christmas, my mom would bring home the flyer and she would have me circle the things I liked so that she can get an idea of what she could get me for Christmas. I remember seeing ads on TV and I would drag my mom to the store so that she can buy it for me. Those ads always had the “cool” toys that were out on the market. Many times I remember being a kid and the moment a toy dropped on TV, it would be sold out in a few days. At the time it really showed that the demand was there. There was always crazy lines and a million people shopping (or so it felt like it. HAHA)  When the company opened up their store on 42nd Street, I was a bit older then, but the store had a FERRIS WHEEL!! I felt like a big kid at that moment. Who would have thought a store would actually put a ferris wheel in their design and I thought it was the most genius thing. Not only can kids shop in their favorite store but they get to ride the ferris wheel to see from high up top the many isles and floors all full of toys.

But with all good things, some come to an end and for TOYS “R” US, this will be the end for them. On March 15th, an article came out on http://money.cnn.com/2018/03/14/news/companies/toys-r-us-closing-stores/index.html , that Toys “R” US will be closing all of their stores! My heart dropped. Not only will kids not have that fun experience, but there will be a total of about 31,000 people without jobs once the company closes all their stores. Toys “R” Us fell victim to the specialty stores being put into the oblivion. Stores like Walmart and Target offers most of the items that Toys “R” Us has and not to mention sometimes at a better price or with perks for the consumer. Then came Amazon which made it a whole lot easier for consumers to purchase online, fast shipping and not having to deal with the headache of having to go into the hectic store to shop.

The total of 735 stores will close down in the US according to court documents that were filed early on Thursday. Toys “R” Us thought that they had a plan back in September when they filed for bankruptcy, expecting to shed some debt and reinvest in its stores. At that time they claimed to have been $5 billion in debt and was spending already 400 million a year just to service it. To me it seems like they really had high hopes at the time being so much in debt but I really feel for them to trying to save the company. It honestly was so revolutionary for kids and they saw that there dreams were fastly coming to an end. It is said that there holiday season was the worst ever and definitely fell way below to what they projected. The company stated that they would have to spend several hundred million dollars just to keep it alive for the end of the year. With all that is going on with Toys “R” Us, no buyer has wanted to come forward to save the company. With that being said, all of their assets are available to buy.

It is unfortunate to know that Toys “R” Us hasn’t made a full year profit since 2012 and since then has lost $2.5 billion dollars.

So here we are, closing a chapter in our childhood that we won’t get to relive but I do thank Toys “R” Us for giving us the opportunity to experience magic and happiness in their stores.

What are your thoughts on what’s going on? Leave a comment down below 🙂